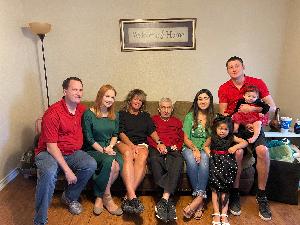 Why I Ride: I am riding the Ride to End ALZ in honor of Bobby Davis.  This is Alisa's father and he was diagnosed with Alzheimer's disease in March of 2012.  He was a football coach and started noticing symptoms probably 8 years before the diagnosis.  He would be coaching and just didn't feel like he was reacting as quickly as he knew was able to.  His family would be in the stands and asking why he didn't make a different call and he knew something was off.  The doctors originally diagnosed him as having Dementia, but they eventually realized it was Alzheimer's.

This has affected every member of her family in every single way.  Fortunately Bobby has Lori Davis, who is his loving wife and caretaker to take care of him every single day.  No family should have to endure what this disease causes though, and that is why I am wanting to fundraise for this cause. I want to make a difference in the fight against ALZ any way that I can.

I am determined to go the distance for all those affected by Alzheimer’s. I am inspired by the strength of the more than 6 million Americans living with this disease, and the over 11 million family members and friends who provide them with care. I am also inspired by science.

With each mile I ride, I am raising funds to advance research toward the first survivor of Alzheimer’s. Thank you for cheering me on.