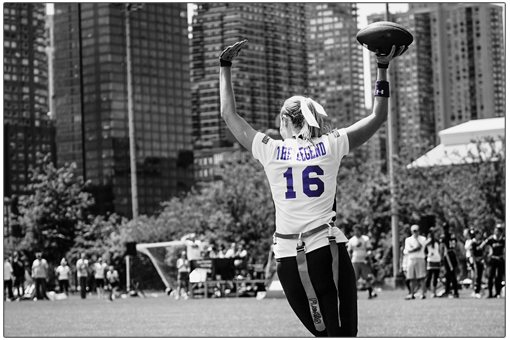 The Alzheimer’s Association RivALZ to End ALZ is a series of volunteer-driven flag football games that engage young professional women in events across the country. As part of the competition, teams are organized around rivalries to inspire fundraising, awareness and action in the fight against Alzheimer’s disease.

Fundraise on the go by sending emails, monitoring your progress and updating your page. You can even deposit checks! Learn more about RivALZ mobile app here

ABOUT THE ALZHEIMER'S ASSOCIATION

The Alzheimer's Association® is the leading voluntary health organization in Alzheimer's care, support and research. Founded in 1980 by a group of family caregivers and individuals interested in research, the Association includes our home office in Chicago, a public policy office in Washington, D.C. and a presence in communities across the country.

An estimated 55 million people worldwide are living with dementia. In the United States alone, more than 6 million have Alzheimer's, and over 11 million are providing unpaid care. The Association addresses this crisis by providing education and support to the millions who face dementia every day, while advancing critical research toward methods of treatment, prevention and, ultimately, a cure.

RivALZ began in the fall of 2005 as Blondes vs. Brunettes®, a flag football event organized by a group of young professional women, in Washington, D.C.

The founders of the event had personal connections to Alzheimer's and designed the event to drive awareness among a younger audience while raising funds for the Alzheimer's Association. Since the inaugural game in Washington, D.C., the event has grown to more than 50 cities, raising more than $18 million and bringing thousands of new supporters to the cause.

In 2014, to accommodate nationwide growth, “Blondes vs. Brunettes” grew into “RivALZ,” empowering participants to choose the rivalry around which to organize their teams. Today, local events are still organized around two opposing teams, such as east vs. west or city vs. suburb, in the RivALZ spirit.