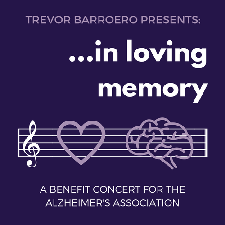 ------
Donate online now and pick up your tickets at Will Call. Can't attend the event? Send in a donation now and watch the event LIVE online at the following link: http://www.livestream.com/ffsom/events/7041357

My grandmother, Claudette Estelle Maddox, passed away five years ago after a long and difficult struggle with Alzheimer's disease. She lived with my family throughout my entire childhood and acted as a third guardian for my sister and me. When my father died from an unexpected cardiac event, she worked tirelessly to help my mother take care of us. From cooking meals, to picking us up from school, to driving us all around town for our various dance, karate, drama, and music lessons, she was one of my biggest supporters.

In the early morning of April 15, 2012, we received the dreaded phone call informing us that my grandmother had passed away in her assisted care home. That same evening, I was scheduled to perform a marimba transcription of Saint Saens' Introduction and Rondo Capriciosso with the Tucson Philharmonia Youth Orchestra. Rather than cancel the performance, I decided to take the stage that evening and use the performance as a dedication and celebration of my grandmother's life.

Music was, and always will be, a source of healing for me. As a passionate and collaborative art form, music can thrive when words fail. It is the tool with which musicians can heal, empower, and communicate with others. For my recital on March 22nd, I have been working hard to find repertoire that will wrestle with the realities of grief while still highlighting the beauty of life and its fragility.

ABOUT TREVOR:
A native of Tucson, Trevor has had many extraordinary opportunities during his years studying music in Arizona, most recently including featured performances as a marimba soloist in British Columbia and as the guest timpanist of the Moscow Symphony in Russia.

Trevor's recital on March 22nd will be his final solo performance at the University of Arizona before graduating and pursuing graduate studies outside of the state. The exciting event will showcase Trevor on a variety of instruments including the marimba, steel drums, and multi-percussion and will feature collaborations with over 10 different musicians throughout the performance.

What: ...in loving memory (A benefit concert for the Alzheimer's Association)