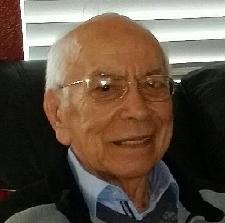 This is a tribute and in loving memory of Gabriel A. Aguirre

Born in Guayaquil, Ecuador in 1928, moved to LA at 21 years of age and found the love of his life Nora Lacayo. They were married in 1952. They had 5 kids and moved to Ecuador and back to Los Angeles several times. He had a lumber business in Ecuador and owned his own Drapery business in Los Angeles. He retired in 1992 and was diagnosed with Alzheimer in 2008. He passed away May 12, 2014 surrounded by immediate family. He was survived by his sibling Glafira, Chayo, Eloisa and Arturo. His kids Lorraine, Martin, Nelson, Rene and Noel. He had three daughter in-law Anita, Sandra and Estella. He also had 13 grand-kids, 6 great grand-kids and 1 great great grand-child. He will always be remembered as a loving Husband and Dad.

When Dad was first diagnosed with dementia we had no clue what this was. Then as his disease progressed it became clearer that this was not something that could be cleared and he would be fine in a couple weeks or months. Just the opposite he would get worse as time went by. First he'd forget how to drive home, repeat himself and what he did yesterday. As time progressed to see him go through this would rip our hearts out. But that was just the beginning of things as he would soon forget the very basic things in life. Eventually he forgot how to walk, talk and feed himself and all the things we just take for granted. We all think our parents will always be there.

The last 2 weeks of his life his condition deteriorated at a faster pace. We would all hold his hand and play his favorite music. The morning he passed away we all prayed and played his favorite songs.

People should not have to suffer through the terrible disease that takes everything from you; your memories, your freedom and eventually your life...... Alzheimer’s took Dad’s life and several relatives around us. We pray and hope that someday there will be a cure. Would you join us in donating today to see if a cure could be found soon? It could save you or your loved ones someday…