Make a general donation to the 2021 Walk to End Alzheimer's - El Paso, TX 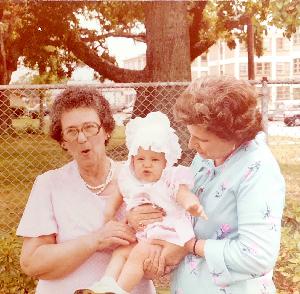 Our office is walking in memory of my late grandmother, Norita McManus. I lost my grandmother when I was a teenager, but I would say I lost her long before her death.  I spent lots of time with my Maw Maw Mac when I was little. My grandfather passed away before I was born, and although my Maw Maw never learned to drive she was very independent. She loved taking trips with the ladies to the Grand Ole Opry. Once I came along, she and I would spend our weekends together watching the Opry and baseball on tv while we drank tea with fresh mint from her potted plants on the porch. It didn't matter how old I was or how much I grew she would always rock me in her rocking chair. She was crafty and loved to sew.

As time passed and I grew older we were not able to visit as often as we did when I was small. Our family would confuse the early signs of dementia with forgetfulness. My mom didn't realize how bad things had gotten until she found out that my Maw Maw would write checks to pay her bills, but forget to mail them.  She had misplaced her valuables, and began hoarding supplies.

She eventually moved in with us. We had a few laughs here and there, when she complained about the service at the "hotel" we were staying at, or tried to make phone calls from the remote. She still recognized us, but couldn't remember where "home" was. She always asked to go there, and would sometimes get up and leave. We all thought my brother was a genius when she asked him to take her home one evening and he calmly said, "Okay Maw Maw, let's go home." He walked her out the front door, and around the side of the house, then  dropped her off at the backdoor. He said, "Alright Maw Maw, you're home now!" He gave her a hug and she thanked him and went to bed.

My parents did everything they could to take care of her, but she wandered off one too many times. We lived in Biloxi, MS and if someone found her and offered to give her a ride, she would give them an old address in New Orleans, LA. That good Samaritan would immediately realize something was wrong. My parents biggest fear was that she would be lost, or a person with bad intentions would find her. They eventually had no choice but to move her into an assisted living facility. She would easily become angry, upset, and confused. She would cry, and ask why God forgot her? My parents had to move her to several different facilities because they simply were not fully equipped to deal with patients like her. She would leave, become combative, and argue. She had become a person that we didn't recognize.

Alzheimer's took her from us. In the moment, I never thought about the financial strain this put on our family, and the stress my parents must have felt. My parents were torn between caring for my grandmother, eventually turning that care over to strangers, and financially supporting our family; all while dealing with a family of their own.  For me personally, I was a selfish teenager who had to deal with a lot of guilt, regret, and sadness when she did pass.

I am so thankful that Edward Jones has partnered with the Alzheimer's Association. What a gift I have been given to raise awareness for a cause that is so personal for me. I worry about the wellness of my family, and if this disease will continue to pass through the generations of our family tree. I worry about other families whose elderly loved ones could be taken advantage of when their families confuse early signs of dementia with forgetfulness. I thank you for taking the time to read my story, and hopefully participate in whatever fashion you see fit.