Valeria is fundraising to honor 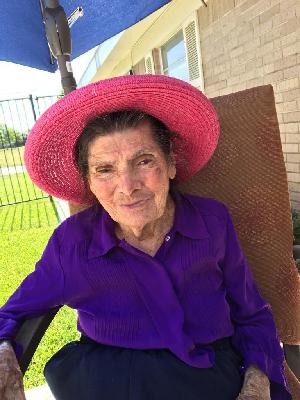 Honoring our grandmother (wuelita) who suffered from Dementia and Alzheimer's, we walk to remember her and end Alzheimer's. This was Olivia 'Via' Ramirez on her last birthday, before leaving us to go to Heaven. Please consider leaving a donation and walk with us this September!

This is my first year leading Team Via, for our grandmother (wuelita) who suffered from Dementia and Alzheimer's. Olivia 'Via' Ramirez was known throughout her community in Eagle Pass and touched many people's hearts with her generosity. In 2012 her and her husband moved in with their daughter, Villamar Ellison, in San Antonio when her disease began. After losing her husband in 2017, she quickly deteriorated. It was with heavy hurts, we came to the decision to move her into a nursing home. Unfortunately, we struggled to understand this disease and want to bring awareness in her memory! After multiple falls and her memory gone, we said goodbye to our grandmother in October 2018. If we knew more about Alzheimer's, I believe our grandmother would still be with us today in the proper facility. We hope to end Alzheimer's and with your help, we can! Please consider leaving a donation and walk with us this September! If you are interested in joining our team, please join us for our walk! It is a free walk and we welcome everyone!

Team Via
Join My Team

View: Team Via
Join My Team