Make a general donation to the 2021 Walk to End Alzheimer's - Binghamton, NY

Alexis is fundraising to honor 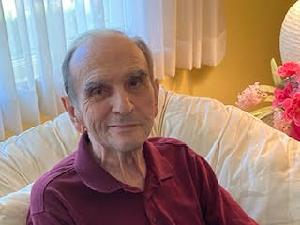 In honor of my grandpa, Leonard DePalmo

Our family lost a very special person at the beginning of this year, my grandfather, Leonard DePalmo. He passed away from Alzheimer’s. Unfortunately, as it is with this type of disease, we felt as if we lost a part of him in the years leading up to his death.

My grandfather was always on-the-go and so full of life. He was sharp and inquisitive. He was fun-loving and had a calming demeanor. Growing up, he never missed his grandchildren’s sports games or academic activities. He had strong faith as he and my grandmother would attend mass almost daily.

All of this changed almost suddenly 3 years ago when he was diagnosed with middle-stage Alzheimer’s. At the time of the diagnosis, I remember asking myself, “How could he already have progressed Alzheimer’s when he seemed like his normal self just days before?” As I have now learned, the early-signs of this disease are not easily detectable especially in older individuals.

The years leading up to his final days were full of doctors’ visits, medications, and caregivers. He no longer could attend social functions or holiday celebrations as he would become quickly confused and frustrated. He would be frequently angered with his loved ones, and even delusional as the disease progressed. Towards the end, he needed assistance with daily normal activities and would barely speak.

Thankfully he had a strong support system. These past several years have opened my eyes to the effect that this terrible disease has on not just the individual, but also the family and close friends. As Alzheimer’s Disease progresses, the family often bears a heavy burden. We were fortunate that he never forgot our names or who we were, but not everyone is as lucky.

I joined the Alzheimer’s Association of Central New York earlier this year to raise awareness for this dreadful disease. Currently more than 6 million Americans are living with Alzheimer’s. Almost every person I talk to either knows of an individual or a family struggling with Alzheimer’s or Dementia. My goal is to educate and provide resources for those who do not know where to turn to for help.

As of today, there is no cure for this disease, but we are constantly making progress. The Alzheimer’s Association is the largest non-profit funder of Alzheimer’s research. The Association is committed to accelerating the global progress of new treatments, preventions and ultimately, the cure.

Sunday, September 19th for the 2021 Walk to End Alzheimer's. Please utilize the link in my bio to join my team and/or donate.

Thank you for helping in the fight to end Alzheimer’s!