One for Alz is fundraising to honor 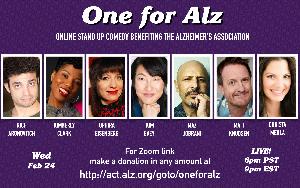 One for Alz is dedicated to my mom, Gayle, who lived with Alzheimer's for six years and my dad, Don, who always made sure she knew she was safe and loved.

Looking for tickets to ONE FOR ALZ? Congratulations, you're in the right place! All you have to do is donate to The Alzheimer's Association by clicking on the yellow "DONATE" button above. Donations are pay what you can. Whatever you can afford, we appreciate your contribution from the bottom of our hearts.

After donating we will email you the ZOOM SHOW LINK. The show takes place LIVE on Wednesday, February 24 at 6:00 pm PST/9:00 EST! Don't forget, it is a LIVE comedy show!

Thank you for joining us in the fight against Alzheimer's for an evening of laughter with family and friends!

Rich Aronovitch - Rich has been seen dancing with Charo on NBC’S The Tonight Show with Jay Leno, hosting Three Men and A Chick Flick on The W.E. Network and The Morning Show on Playboy TV. He has appeared on Gotham Comedy LIVE; Last Comic Standing and as a guest judge on Beat Bobby Flay. He has been heard on Opie and Jim on XM and Satellite Radio, Friday’s with Jim Breuer on Raw Dog Channel 99, Standup with Pete Dominick XM Sirius Radio; and was recently a guest on the Anthony Cumia show on Compound Media.

Kimberly Clark - Kimberly Clark is highly regarded on the LA comedy scene for her unassuming style and biting wit. She is currently featured in Season 2 of Tiffany Haddish Presents: They Ready on Netflix. She was a contestant on NBC's Last Comic Standing and a guest on Lopez Tonight.  A favorite among comedians and audiences alike for her dry humor that trains a precision lens on pop culture, politics, personal experiences, and the absurdity of everyday life, Kimberly was one of Time Out LA's Comics To Watch in 2018.

Ophira Eisenberg - Ophira is the host of NPR’s nationally syndicated comedy trivia show Ask Me Another. Her stories have been featured on The Moth Radio Hour and in their best-selling books, including the most recent: Occasional Magic: True Stories About Defying the Impossible. Ophira’s own comedic memoir, Screw Everyone: Sleeping My Way to Monogamy was optioned for a feature film. She has appeared on Comedy Central, Kevin Hart’s LOL Network, Gotham Live, The Late Late Show, and The Today Show.  Her comedy special Inside Joke is available on Amazon and iTunes.

Kim Evey - Kim’s stand up clips have been viewed online over eight million times. She has appeared in numerous television shows, including Station 19, Boston Legal and ER. She has written sketch comedy and children's animation for television and she also created and starred in the Sony Pictures Television web series "Gorgeous Tiny Chicken Machine Show."  Kim also produced the trailblazing web series "The Guild," a show so iconic it was put on display in The Smithsonian American History Museum.

Maz Jobrani - Maz is the host of his own podcast, Back To School with Maz Jobrani on the All Things Comedy Network. His new standup comedy special Pandemic Warrior is now available for streaming on PeacockTV. Other comedy specials include the Netflix original Immigrant, as well as 3 specials on Showtime: Brown and Friendly, I Come in Peace, and I’m Not A Terrorist But I’ve Played One On TV. As an actor, he was most recently seen playing the loveable “Fawz” on the CBS comedy SUPERIOR DONUTS.

Matt Knudsen - Matt has appeared on Conan, The Late Late Show, Last Call, ASX Live and Comics Unleashed, as well as dozens of festivals, including: Montreal Just for Laughs where he was name Best of the Fest. His critically acclaimed albums The Comedy Stylings of Matt Knudsen, American, and Yes And  are top downloads on iTunes and heard regularly on SiriusXM and Pandora radio. As an actor, Matt has appeared in dozens of Emmy and Golden Globe winning television shows like Key & Peele, Workaholics, The Big Bang Theory, Crazy Ex-Girlfriend, The League, NCIS, Big Love, Boston Legal and Malcolm in the Middle.

Christa Meola - Christa Meola is a published author and performer who’s been on stages worldwide, performing stand up and theatre in London, a one-woman show in NY/LA, and is currently developing a TV series about women over 40.