Make a general donation to the 2020 Walk to End Alzheimer's - Kokomo, IN

Phillip is fundraising to honor 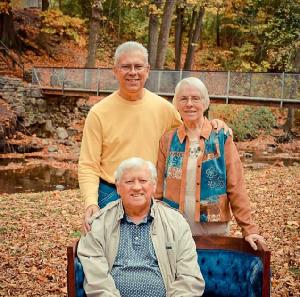 I have taken a very personal interest in this fight to end Alzheimer's and all other forms of Dementia. The disease has hit very close to home for me. I am an only child and a true Momma's boy. So when my Mom began to suffer from Alzheimer's about 5 years ago, I began this journey of learning what it is I'm fighting and how to fight it, while doing all I can to provide the best quality of life possible for my Mom.

Now, just a few months ago, after a series of mini-strokes, my Dad was diagnosed with Vascular Dementia. The symptoms are very similar to Alzheimer's, but it is much faster at robbing those living with the disease of their cognitive abilities. Dad has slipped away in the last 3 to 5 months as much as Mom has in the last 3 to 5 years.

I am perhaps the world's worst loser and that has made me fiercely competitive in life. With that mindset, I am not jus "in it to win it", I'm in it to END IT! I don't want anyone else to ever have to suffer with this disease or have to watch their loved ones slip away from them, until all that's left is an empty shell of who they once were.

I am forever grateful for memories! Unfortunately, for those living with the disease, those precious memories are what they lose first. Its perhaps the most cruel disease anyone ever has to deal with personally.

The goal is to find a cure so that we can all live in a world without Alzheimer's or any other form of Dementia. I want to see the first White Flower that represents the first survivor of this disease! I would be both honored and grateful if you would join me in this fight.