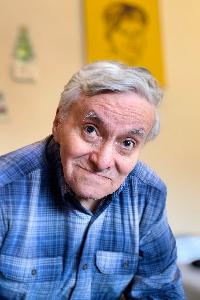 In 1969, Victor left Quito Ecuador with a one-way ticket to New York City on an adventure to see if he could "make it". From this brave step has unfolded a rich, incredible life story.

With only one friend in NY, Victor began making his way by learning English, securing a job with his engineering degree, and eventually meeting his wife Janet (who would be with him for nearly 50 years).

After "making it" in New York City, and then several years back in Ecuador, Victor and Janet moved to Buffalo, NY where they would stay raising a family and supporting their neighbors and community.

Victor would coach soccer for 20 years in the community, touching hundreds of lives, and volunteering his time to grow the sport and love of the game. He would go on to proudly become a U.S. citizen, and steadfastly cheer on the Buffalo Bills and Buffalo Sabres. A civil engineer with admiring friends and colleagues, Victor also was an artist whose oil paintings, caricatures, and commercial artwork are all a testament to his talent and interests. Victor lived a full life with friends, family, and colleagues across Buffalo and Erie County.

Upon moving to Norristown (Pa.) to be closer to his family and grandchildren (after Janet passed), Victor continued his journey. Watching grandchildren at soccer games, building legos with them, being silly together, and sharing stories about the family ... this is how we will remember Grandpa Victor. His brave journey, love for family, and sense of humor can be seen today in his incredible grandchildren who will carry on his memories.