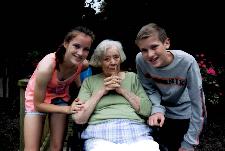 Marjorie "Peggy" Glick was born on September 15, 1924 in Knoxville Tennessee. Her family lived most of her childhood in Portsmouth Virginia. Her father worked at the Norfolk Naval Shipyard. Peggy went to Miami University of Ohio after high school.

While working as a stewardess for Capital Airlines, Peggy met the love of her life -a US Marine named Jacob E Glick. They were married on December 7th, 1951 and spent the next several years living where the Marine Corps sent them- Camp Lejeune NC, Quantico VA, Hawaii, and finally Alexandria, VA.

They raised 3 children- Dr Jeffrey Glick, Susan Glick Waller, and Maj. Thomas Glick, USMC retired. Peggy loved to entertain and have guests over to their house. When Jake retired from the Marine Corps, she found time to become a professional tour guide for The Washington Guide Service in Washington, DC. Peggy loved to travel and when she wasn't working, she and Jake found time go on cruises and travel the world with friends and family. She learned to paint with oils and acrylics, and she loved to cook and read.

In June 1995 Peggy and Jake moved into The Fairfax, a retirement community in Ft Belvoir VA. Peggy served on numerous committees and was recognized as a Volunteer of the Year. She continued to paint and was a member of The Belfair Artists. Some of her art was featured in the Retired Officers Association Magazine. She and Jake were founding members of the Belvoir Woods Protestant Mission Society.

Peggy was active within the Fairfax community until Jake passed away in Aug 2011, just short of their 60th wedding anniversary. After Jake's death it came to light that Peggy had been suffering from the initial stages of Dementia for some time. They had never told their children about her symptoms or condition. Peggy moved into the Alzheimer's care unit at the Fairfax and lived there for six months until she was no longer qualified for that level of care. Diagnosed with "end stage" Dementia, she was placed under Hospice care and was moved to the full care nursing facility at The Fairfax.

To everyone's surprise and relief Peggy "graduated" off of Hospice a year later, however, she began a steady 7 year decline that left her in a wheelchair and unable to speak. Her body was strong and fought on, but her mind was ravaged by the disease. After more than eight years of living with diagnosed Dementia/Alzheimer's Peggy passed away peacefully with her family by her side.

Your thoughtful donations will help to find a cure for this terrible disease that has robbed Peggy and so many others of their memories and ability to interact with their loved ones.