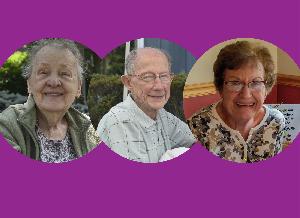 An Alzheimer's diagnosis can rock a family to its very core.

But how about three?

Two years later, my mother's father was diagnosed with Alzheimer's. This time, we recognized it for what it was, but it didn't make things any easier. We tried to prepare and tackle each new step head-on, but if you're reading this, you know Alzheimer's never gets easier.

And just when we thought we'd seen everything Alzheimer's could wreak havoc on, my mother's mother was diagnosed this February, after a tricky battle with COVID-19. In fact, she returned home from a hospital stay with her new diagnosis just two days before her husband passed away from the disease.

We're walking to do our part in finding an end to this horrendous disease. My hope is that in the future, grandkids won't have to watch their grandparents slip away, memory by memory.