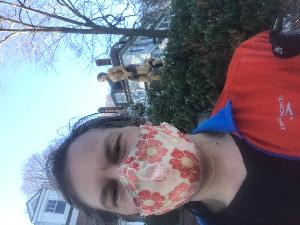 Me and the similar-looking carved wooden runner on Commonwealth Ave, March 27 2021

Please join me in combating the impacts of Alzheimer’s disease as I run my ninth annual Boston Run to Remember half marathon on behalf of the Run to End Alzheimer’s team on Labor Day weekend! Traditionally the run happens Memorial Day weekend, but in this second year of the run as a virtual event, I plan to run on Sunday September 5.

I invite you to donate in support of the run, to enable further research and caregiving combating this very challenging and often devastating disease. As you may know, my father Bob Carlson began to show evidence of Alzheimer’s disease in his late 50’s, and eventually died of related causes in 2009 at age 68. Other close family and friends have also been impacted by different stages of Alzheimer’s. Because I have seen the seriousness of this disease firsthand, I would like to do my part in making a difference.

As part of the Alzheimer's Association's Run to End Alzheimer's team, I will be raising money for individuals and families affected by the disease, which currently afflicts more than 5.5 million Americans. Proceeds go directly toward improving the lives of those affected by Alzheimer's, supporting caregivers, and funding critical research needed to find a cure to end Alzheimer's. I have set a goal of raising $2,021 in contributions, which will go to the Massachusetts/New Hampshire Chapter of the Alzheimer’s Association. I hope you will respond generously with a tax-deductible donation. If you have any questions, please email me at benmcarl@yahoo.com, ben.carlson@goodyclancy.com or call me at 617 959 4667.

Look for some photos from my runs on my Facebook page. The photo above (which I can't get to show right side up) shows me running past the carved wooden runner who looks somewhat like me on Commonwealth Ave. in Newton last March 27. I’m lucky to have some great running routes close by around Boston’s Emerald Necklace, and when traveling to other places I often find a good running route there. For this year’s run, like last year, I may run a route that combines part of the usual route along the Charles River in Boston/Cambridge with the Emerald Necklace in Boston.

I hope you will support me and the Alzheimer's Association, as I run to the finish line. And thanks again to the many of you who donated so generously the past four years!