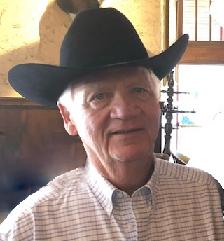 Please take a moment to sign the Guest Book or share a memory of Jerry with the family. Thank you for taking time to remember Jerry and for your generous donation.
Sincerely,
Jerry’s Family

Jerry grew up south of Hinton and attended Hinton Public Schools until he joined the United States Air Force at the age of 17. After leaving the service, he was a Park Ranger and Lake Patrol Officer at Ft. Cobb Lake in Oklahoma. Throughout his life, Jerry was an entrepreneur in both Oklahoma and Louisiana, opening several convenience stores, a lumberyard, a Chrysler car dealership, and a Piggly Wiggly grocery store. Jerry was also appointed as a Special Deputy Sheriff for Bossier Parish in Louisiana.

At a young age, Jerry became a cowboy competing in local rodeos. His passion for rodeos lead him to become a rodeo stock contractor and rodeo producer for several years in numerous states. In 1980, Jerry was named Rodeo Man of the Year by the Short Grass Country News. Jerry’s love for horses led him to become an owner and trainer of thoroughbred racehorses. He entered horses in races in Louisiana, Texas, and Arkansas for more than forty years. Louisiana Downs Racetrack named him Trainer of the Month several times throughout his career, and in 2009 he was honored as Leading Trainer.