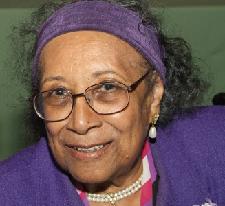 This fund has been created in the loving memory of our family matriarch, Velvia C. Lyle.

Velvia Comolia Lyle, was born on November 26, 1923 in Lexington, Missouri to Florida Boldridge and Allen Douglass. At the age of five she moved with her mother to Oakland, California and graduated from McClymonds High School.  After high school Velvia married Billy Samuel Lyle and they had three children: Floryda, Billy Jr., and Hazel.  She also helped raise her beloved sister, Luisa.

While her husband fought in World War II, Velvia raised the family in Oakland’s Brookfield Village. Velvia took and passed the civil service exam and began a long career with the United States Postal Service, retiring in 1985 as a budget and cost supervisor. Velvia was an active member of Bethlehem Lutheran Church and many philanthropic and service organizations, including The Order of the Eastern Star, the Heroines of Jericho, and Teenagers of the Thirties.

She spent quality time with her family, traveled throughout the United States and abroad, enjoyed sewing and the Oakland Raiders, and made the world’s best apple pie. Velvia moved to Alameda, California in 1973 where she remained active with her church and the many organizations to which she belonged. She also put her accounting skills to good use, serving on the counting team for offerings at Bethlehem, helping other senior citizens prepare tax forms, and serving as the secretary and treasurer for many organizations.

Velvia was preceded in death by her daughter Floryda Gullatt and her granddaughters Nubia and Inity Morrow.

Velvia passed away due to complications from Alzheimer's on August 30, 2016.

Velvia, your spirit and light continue to shine onto lives of countless family members and friends you have known during your 92 years on this earth.  May you rest in peace.