Mark is fundraising to honor 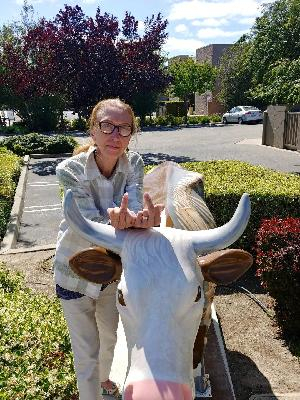 Mom never lost her sense of humor as shown by sign language in this picture :-)

Donna Lee Muller died 2-8-21 suffering the ravages of dementia. Born to Joseph and Maxine Rusackas, she adopted the Brown name after her father came home and died after service as a medic in Normandy when Donna was four years old and Robert, Bob, became her father in 1951.

Donna made many friends, among them Barbara Whitlow and Audrey Kolze on her sojourn working in San Diego for Campbell Machine and Pacific Southwest Airlines at age 21, about which her friend Barbara said, “We had such fun times together that I'll never forget. She was my first real buddy at PSA, and I was in awe of how she terrified some of the men we worked with! It was hilarious!” And that is where Donna’s and her future husband, “John Bob’s” paths almost crossed while he was attending MCRD. They were separated by a large runway and an eight-foot fence, finally meeting and marrying in 1971. Donna continued her work career in San Luis Obispo as office manager for Senator Donald Grunsky and Assemblyman William Ketchum and then for Assemblywoman Carol Hallett.

During a hiatus for motherhood Donna volunteered for seven years as an aide at C.L. Smith school and as the very popular “Ice Cream Lady” with her best friends Sandy Anderson and Diane Anthony. She then returned to work for Christy and Ed Sweeney at Louisa’s Place and loved every minute of that experience until she retired. Much of her salary was donated to animal care charities. She once cared for up to eleven cats, most of them “back yard volunteers”.

Special thanks go to Donna’s good friends and neighbors, Barbara Wolcott, whom we all miss, as our Marine Corps League Toys for Tots Coordinator and great companion to Donna, Diane Anthony, for collecting toys, taking Donna out for entertaining rides every Wednesday and for driving out to help “John-Bob” find Donna when she wandered, Ann Grady (David, Lisa and Shannon), Laura Borchard and family, Arna Holland and family who provided many delicious meals, the Louis and Evelyn Verdugo family who all gave their time and love before and during the last years, Terry and Jeri Farrell who befriended and supported us, Walter Hanson of Bishop who prayed for us and finally, to Mary Kimble, John’s younger sister who conducted a one-on-one intervention to obtain memory care placement for Donna and to son Mark who provided much needed respite.

FUQ A DUCK
Join My Team