Make a general donation to the 2023 Walk to End Alzheimer's - Anderson, SC 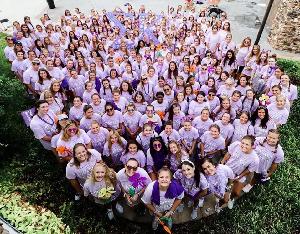 More than 5 million Americans are living with Alzheimer's disease. It is the 6th leading cause of death and kills more people each year than breast cancer and prostate cancer combined. Half of primary care physicians believe the medical profession is not prepared for the growing number of people with Alzheimer's and other forms of dementia. By 2050, it is expected that 16 million Americans will be living with Alzheimer's. That is the population of New York City, TWO TIMES. And the amount of people affected by this disease, aside form those who have it, is too great of a number to even try to guess.

Sigma Kappa fights to end Alzheimer's every day and prides itself on being the first sorority to recognize the need for a more comprehensive study on aging and memory in the elderly community. Our mission is to bring awareness to the disease and raise money to find a cure. Alzheimer's is the ONLY disease in the top 10 leading causes of death in the United States that is unable to be cured, prevented, or slowed down. Many people suffer directly from this disease, and many more struggle seeing their loved ones go through this terrible disease.

Sigma Kappa, Kappa Pi at Clemson University is asking for your support in fighting Alzheimer's. We pride ourselves on being one of the Top 5 fundraising teams for Sigma Kappa, and we hope to raise even more awareness and funds for Alzheimer's care, support, and research. Please consider donating below, as this is a disease that everyone needs cured. When we one day find a cure for this horrible disease, we will look back and be able to see how every donation made helped to support the Alzheimer's Association in that discovery. I, along with my sisters at Kappa Pi, fully believe there is no organization more worthy of your donation.

Our Walk
2023 Walk to End Alzheimer's - Anderson, SC
Date to be announced