Make a general donation to the 2023 Walk to End Alzheimer's - Reno/Sparks, NV 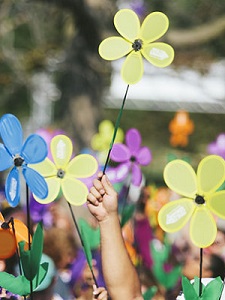 My experience with Alzheimer’s started in 2001. My grandfather (my father’s father) died of what was first described to me as senility. I was in my early 20s and thought nothing of it; people in their 80s just forgot things.

This cause is important to me not only because my grandparents have the disease, but also because I am a financial advisor with Edward Jones, and I work with families currently living with this disease. Over the years, Edward Jones has helped many families work toward their financial goals, many of whom have dealt with Alzheimer’s disease or dementia.

It wasn’t until January 2016, when Edward Jones announced it was stepping forward to become the National Presenting Sponsor of Walk to End Alzheimer’s, that I learned about the many resources provided by the Alzheimer’s Association, including educational and outreach programs right here in my own backyard (Reno). I now actively share this information so that members of my community are aware that the Alzheimer’s Association is in local communities and here to help them!

Getting involved was surprisingly simple. When Edward Jones asked about helping with local outreach at Walk to End Alzheimer’s, I responded immediately. They put me in touch with my local Alzheimer’s Association chapter and offered me a position as a volunteer for our local Walk. In addition to helping the Alzheimer’s Association, this also gave me the opportunity to learn more about the resources available to help my grandparents and my clients.

As part of my personal commitment:

I want my family to be safe and sound, and I want to tell my clients – many of whom have become friends – that to know that they aren’t alone when facing this disease. Thanks to what seems like fate, I’m proud to say I work with this great organization and plan to continue until there is a cure.

Edward Jones - Walking For A Cure In Nevada
Join My Team

View: Edward Jones - Walking For A Cure In Nevada
Join My Team