Katie is fundraising to honor 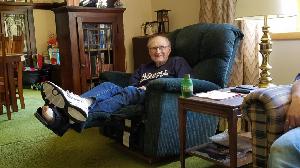 In 2015 my grandpa was first tested and started to be treated for dementia. By 2017 he was diagnosed with Alzheimer's by verbal testing and an MRI. He was tested again every six months, and for the first year his answers and tests came back very similar. Unfortunately after that first year his tests started to decline at a much quicker rate than anticipated. In the spring of 2020 he had to be placed in a nursing home during the madness of the Covid pandemic. Our family was only able to have phone conversations with him and a couple of window visits. None of us were ever able to step inside and see him or visit with him. He lost his battle with Alzheimer's on September 14th, 2020, we are so thankful we were all able to see him in the hospital before he passed and that he went out with his wife and daughters by his side.

Shortly after my grandpa's passing I decided to join the Alzheimer's Association walk committee as a volunteer and I have been blown away by all they do and how passionate they are about finding a cure and being a support to those diagnosed, the caregivers, and the families.