Therese is fundraising to honor 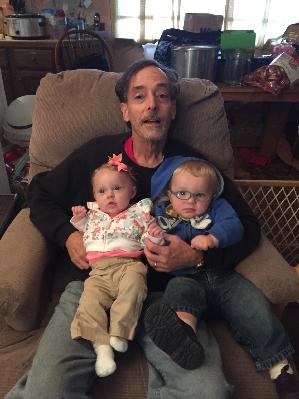 This is the last photo I have of my dad with my kids, taken on his birthday in 2016, before his condition worsened.

Mail-in donation
My father was diagnosed with early on-set at the young age of 57 and we learned it had progressed to the mid stages already at that point. It's so hard to catch in the earlier stages and I want to be a part of making that a possibility. I don't want other families to go through what my family has. Watching someone you love slowly become a shell is terrifying and an emotional roller coaster. It was hard in the beginning when it was just Mom and I trying to care for dad and make it work. Trying to make all the appointments with the neurologist and understanding the changes that were going on in my father's mind. Patience is key and it's hard to keep when you know how someone was and it's easy to let slip the knowledge that they're not the same. It was a long rough road to come to where we are now. We lost dad right before Christmas 2017. I'm happy we had him for as long as we did, but I wish my children could have known him longer as the man he was and not the man Alzheimer's made him. I lost my father in 2017 but I lost my dad well before that.

Please join me in honoring my father by making a donation or joining the Goosey Memorial team for the Bremerton Walk to End Alzheimer's.
View More
Join My Team Donate Now