Theresa is fundraising to honor 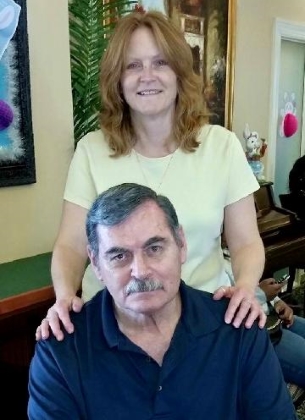 One of the last pictures of my Dad & me together.

In 2005 I learned that my father had the early onset of Alzheimer's.  Wanting to know more about it, I began to educate myself doing research and by attending seminars given by the Alzheimer's Association.  I also started participating in the Walk to End Alzheimer's because I wanted bring awareness to others, but mostly, because I wanted a cure.

Since learning my dad had Alzheimer's, I watched helplessly as he slowly began to lose his short term memory. He was losing his sense of reason. Some people took advantage of him. He was no longer able to drive. He would not let us take care of him, would not move in with any of us nor care for him in his own home, and would not let a professional come in and care of him.  He ultimately lost his ability to stay in the home that he had been in for over 44 years, that he shared with his wife, and raised his children in. He ended up in the hospital one day and from there into a memory care community, to monitor his medications, his health and his safety around the clock. Although we tried very hard to make his room at the memory care community like home, it was never going to be home. It was so hard to watch this strong, humble, loving, kind man, fight a fight that he could not win.

One day my dad fell ill from some type of virus during his stay in the memory care community and needed to be admitted to the hospital.  His diseases made it very difficult for doctors and nurses to treat him.  He could not remember why he was there. Late at night when we were not there, he would pull out the IVs and PICC lines that were used to treat him. He his body was tired, his heart no longer strong enough, and he eventually lost the fight.

Now his mind is free of all the stress, anxiety, depression, paranoia, and hallucinations. My dad, my hero, now reunited with his love, my mom. Thoughts are clear, body is strong.

I will be participating in the Walk to End Alzheimer's in Fredericksburg, Virginia.

My team, Rays of Light formed many years ago, and was named after him, but we walk for all who are affected by Alzheimer's, those living with it as well as the caregivers.

Please support me in my fight to find a cure, by making a donation or walking with our team.

Rays of Light
Join My Team