Make a general donation to the 2022 Walk to End Alzheimer's - Weatherford, TX

Gina is fundraising to honor 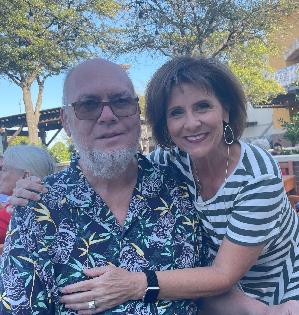 In 2011, I felt a strong call from God to become a Social Worker.  With my husband's (David) support, I returned to school to pursue a degree in Social Work. Years before David’s diagnosis, I had participated in Walks to End Alzheimer’s although I had no family or friends with the disease - no inkling whatsoever of a reason to support this cause. While in school, I studied about Alzheimer's Disease and other dementias - and completed a paper and brief presentation for my classroom at UTA. After graduating with my Master of Social Work in 2015, I worked in various nursing facilities. I saw first hand the cruelty of Alzheimer's Disease and other dementias.  Little did I know that God was preparing me for what was to come.

In 2018 I began to notice changes in David's memory. He had always been such a brilliant man and engineer, so I became concerned when he struggled with tasks that had once been easy.  David was diagnosed with Alzheimer's in late 2019 and was urged by medical professionals to retire. Our lives have now become very simple and sweet - and after almost 38 years of marriage - we experience The Lord's hand more than ever. We are surrounded by loving friends and family who reach out, pray for us, and encourage us.

When the strong urge came for me to begin a team in 2021 and come up with a team name, I began praying but received no clear answer. One day I shared with David that I had been praying for a team name to honor him, and asked if he had an idea. The following morning, he told me an angel put the team name in his mind. He had gotten out of bed hours earlier and written it on a card quickly while he remembered.  He brought the card to me, and it read  “Touches of Angels”. When I asked him how he came up with that name, through tears, David said, "those who are walking on my behalf - they are each touches of angels". This precious humble husband of mine - who I wanted to honor with a team name - wanted to honor others instead.

If you feel so led, please make a donation or register as a participant and start your own fundraising. Together, we can end Alzheimer’s disease.

Touches of Angels
Join My Team