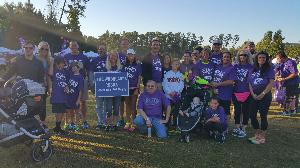 Team page of The Woodlands Rocks

ALZHEIMER’S HAS KILLED MY FATHER-IN-LAW (A GEOLOGIST) AND IT HAS KILLED SEVERAL OTHER GEOLOGISTS WHO MENTORED ME IN MY EARLY YEARS AS A GEOLOGIST, BUT IT GOT VERY PERSONAL FOR ME WHEN IT STRUCK MY WIFE 9 YEARS AGO.

There is no cure for Alzheimer’s……only death after a long and terribly undignified trek down a dark road where no one should be allowed to go.  You need to understand that Alzheimer’s is NOT just a disease of the elderly, it can strike its victims in their 40’s and 50’s…..like it did my Father-in-law and it started slowly robbing me of my best friend, Gail, when she was 54.

Alzheimer’s has taken Gail’s memory, her speech, her ability to perform even the most basic daily living functions, her ability to feed herself, bathe, walk or do anything by or for herself…..even down to the basic fabric of her very “being”.  Think about a 120+ pound 2-year old….that’s where you end up with this disease…..and when it has taken everything but their will to live………it finally takes that, too.  Unfortunately the “victim” with the disease isn’t the only casualty in this war that we are losing.  The caregivers often do not outlive their loved one.  It is too late for Gail, my best friend, and way too late for my old geology mentors, BUT it is not too late for you and yours.  I desperately want to do something to stop this disease from reaching anyone else, so I looked for a way to increase the funding for research needed to find a cure OR at least find a way to manage Alzheimer’s, such as researchers have done in a relatively short time for other killer diseases.

The Alzheimer’s Association’s major fund raiser is the annual “Walk to Find a Cure”.  The 650 “Walks” conducted all over the nation are held in the fall (October 4, 2014 at the Town Green Park for The Woodlands/Montgomery County Walk), BUT the critical fund raising is done over the summer.

I thought it would be great to form a Walk team …..a team focused on our/your home ground.  Although the team is centered around The Woodlands/Montgomery County area, anyone who has the desire to stop Alzheimer's, is welcome to join and/or donate

I am working to build a team and raise funds to find that cure; contacting as many residents and their families, friends, co-workers throughout the region, including past and present residents of the area…..heck, if they can spell T-h-e W-o-o-d-l-a-n-d-s or know where it is or have driven through it or have even heard of it……they are welcome to join “The Woodlands Rocks” team and our cause. I picked the name “The Woodlands Rocks”…..to focus on us geos (the “Rocks” part) and on The Woodlands in general (“The Woodlands" part).

Come join the team or at least find a way to make a donation to this cause.....together we need to raise the funds to find a cure for Alzheimer's before it becomes the epidemic that the U.S. Surgeon General says it is headed for.