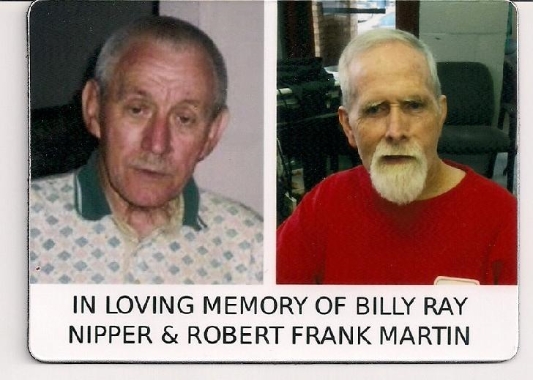 Mail-in donation
CHAPTER 1: I learned the hard way what the disease of Alzheimer's/Dementia was. I never knew what Dementia was until the day my dad, Billy Ray Nipper was diagnosis with it. Dementia actually causes a very slow death. Dementia causes the brain to slowly deteriorate or shrink. Affecting one part of the brain at a time. The last part of the brain Dementia affects is the Brain Stem, which controls your breathing and heart. Dementia is really Alzheimer's and Dementia is a group of symptoms.

Dementia causes a person to become combative, verbally combative, and use words that they normally don't use, for example profanity. My dad was a godly Christian man and never would use profanity, never was combative, or verbally combative. After my dad was diagnosis with Dementia, he would be verbally combative and use profanity at times, especially toward the doctors and nurses. This was not my dad, it was the disease. On one occasion, I went outside his hospital room one day, and just started crying, because I could not handle seeing my dad that way. As I was crying I verbally, said to myself "Why? I want my dad back." You never know when a person with Dementia was going to get combative. Like my dad, he went a few days acting normal, and then the combative symptoms started.

Robert was not only my uncle, was a second dad to me, and he thought of me as a son. My mom never abandoned her brother. On Thursday morning, September 13, 2018, about 1:45 a.m., I got a call from the nursing home Robert was at. The nurse told me I needed to get to the nursing home quickly, at that moment I knew what it was. As I walked through the door at the nursing home, the nurse told me at 1:32 a.m. my uncle Robert Frank Martin stopped breathing and passed away. Robert had gone home to Heaven (less than two years after being diagnosis). This horrible disease (Dementia) took my dad and my uncle from our family. At Robert's funeral, before the casket was closed I went up to Robert's casket kissed him on the fore head. Then I placed my hand on his shoulder, and I made a promise to Robert, I promised Robert for the rest of my life, I would help to fight this horrible disease known as Alzheimer's/Dementia until a cure is found. [NOTE: Robert entered St. Thomas Rutherford Hospital on August 28, 2018 (his wife's birthday). Robert passed away on September 13, 2019, his wife Sherry passed away September 13, 2001.]

CHAPTER 4: Since 2014, my wife Karla and I are have been a part of the Alzheimer's Association, and we are honoring my dad Billy Ray Nipper and my uncle Robert Frank Martin in the fight to END ALZHEIMER'S/DEMENTIA. We have formed the team "TEAM MARTIN & NIPPER" to get family members and friends to participate with us. Also since 2015, I have been Volunteer Advocate for the Alzheimer's Association here in Tennessee.

CHAPTER 5: Finally, Alzheimer's/Dementia is a horrible disease and I would not wish it on my worst enemy. This disease causes an individual to either die quickly or slowly. To me this disease is more horrible than cancer. Why? Because the individual does not even know he or she is dying

Karla and I are leading the way to Alzheimer's first survivor by participating in the Alzheimer's Association Walk to End Alzheimer's® (for the eighth year in a row). Currently, more than 5 million Americans have Alzheimer's and that number is expected to grow to as many as 16 million by 2050. Our future is at risk unless we can find a way to change the course of this disease.

With your help, we can end Alzheimer's disease. How can you help? 1) By making a donation to advance the care, support and research efforts of the Alzheimer's Association. This can be done by going to my Alzheimer's Page, by clicking here http://act.alz.org/goto/dennisnipper and help me reach my individual goal of $1,000. 2)  By Participating in the WALK TO END ALZHEIMER'S. This can be done by joining my team, "TEAM MARTIN & NIPPER" by clicking here http://act.alz.org/goto/teammartinandnipper and help ourteam to reach our team goal of $2,000