Make a general donation to the 2022 Walk to End Alzheimer's - Monroe County, PA

Kieran is fundraising to honor 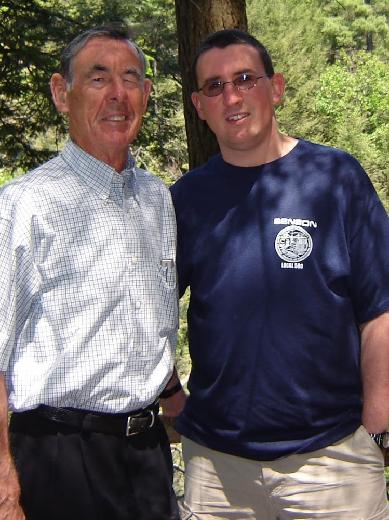 Most of you know my story.  My Dad had Alzheimer's when he passed away.  It was not necessarily the Alzheimer's that took him from us physically but it certainly did erode away at the father, husband, brother, and friend that many of us knew him to be over the years.

It is a truly unfortunate disease that I have come to know over the past 10 or so years.  It is a challenge keeping up with the ever-changing scenarios that the patient's mind comes up with and fabricates as the truth.  I had to learn not to fight or argue and just to allow things, at times, to take their course.  There were other times that one minor change to the exact same conversation would completely alter the outcome.

I'll give you two quick examples.  Over several months I worked for Turner in Orlando and there was one week that the hotel I was staying at was booked so I worked offsite for the week from my parents' house.  My Dad expressed concern to my Mom that he wasn't sure I knew what I was looking at on the drawings spread across their dining room table.  Another time my Dad commented to me in May that the snow must be melting in NY.  The snow had been gone for over a month and it was, in fact warm for that time of year in the 80s.  One day I only responded that the snow had been melted for some time. The very next day I added that the temperature was actually close to 90 and that set him off.  He was convinced that I was lying to him about the temperature because there was NO way that it was that warm in NY in May.

Usually I go to Florida to do the Walk with my Mom there but this year due to personal and financial commitments, I cannot go.  So I have decided to do this walk locally and hopefully attract some local friends and colleagues to join me in raising money for such a wonderful cause.

I want to assure you where your donation is going.  It is not like so many other charities that drains so much of your donation for "administrative costs"

78% of your donation goes DIRECTLY to Alzheimer's care, support, research, awareness, and advocacy

18% of your donation goes to fundraising efforts

4% of your donation goes to administrative costs.  ONLY 4%!

in Memory of Peter Lavin
Join My Team

View: in Memory of Peter Lavin
Join My Team