Susan is fundraising to honor 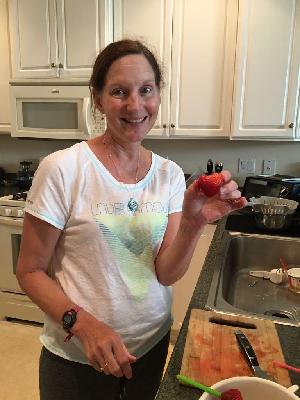 Janet prepping dinner for one of our weekly get-togethers.

Mail-in donation
Together, we can end Alzheimer's disease. Please make a donation to advance the care, support and research efforts of the Alzheimer's Association.

My dear friend Janet Brown was a beloved Family Practice physician in the Phoenixville Area for many years until this terrible disease forced her to stop practicing. Janet is still full of a desire to help people, only now her journey takes her to raising awareness that no one is immune to this disease and we need to find a cure NOW! There are many forms of dementia under the Alzheimer umbrella and Janet's is known as posterior cortical atrophy (PCA).
(Written and posted with Janet's permission)

Janet and I are leading the way to Alzheimer's first survivor by participating in the Alzheimer's Association Walk to End Alzheimer's(R). Currently, more than 5 million Americans have Alzheimer's and that number is expected to grow to as many as 16 million by 2050. Our future is at risk unless we can find a way to change the course of this disease.

Please join our team and walk with us on October 6 and/or donate if you are able. Janet and I would love to have you on our team!