Make a general donation to the 2022 Walk to End Alzheimer's - Portland, OR 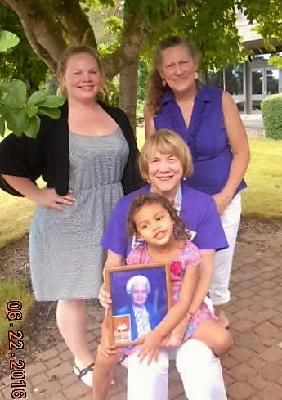 Gracie's Gang began walking Sept 1991 at Wallace Park in Northwest Portland in honor of my mother Grace Morris.  Grace is a family name, my mother being named after her Grandmother Minnie Grace Howe Wilson and her Aunt Grace Spafford Boon.  My mom is in the photo with our 4 family members who also carry the name Grace. Myself  Barbara Grace, oldest daughter Donya Grace, granddaughter Alana Grace, and great-granddaughter Amaya Grace.  I started walking because of my Mom and as noted now I have a long list of friends and family with Alzheimer's or other Dementia's.

I am walking in honor this year for my husband Ed and my friends who now have Dementia including Alzheimer’s.  Every year the list gets longer of persons you and I know.

Who do you know that you want to honor?

Support Gracie’s Gang by donating and honoring the family and friends who are dealing with this disease.         LETS END THIS DISEASE!!