Make a general donation to the 2022 Walk to End Alzheimer's - Central Oregon - Bend, OR 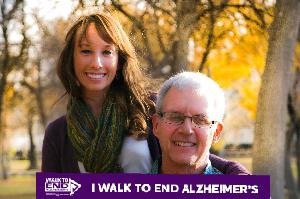 I’m walking in my seventh Walk to End Alzheimer’s to honor my father, Jim Webster. I also walk to honor more than 6 million Americans living with Alzheimer’s and over 11 million unpaid caregivers. I walk for my mom, Audrey and my Uncle Scott who served as my dad’s caregivers.  My dad was diagnosed with Alzheimer’s in 2013. He became free from his fight with Alzheimer’s on November 13, 2021. For too many years we watched him suffer, decline, and lose his abilities. As Alzheimer’s settled into his brain it brought with it anger, outbursts, confusion, tears, changed behaviors, lost abilities, and mumbled speech to  name a few. As Alzheimer’s began to fully take over his brain and  body it brought more quiet, blank stares, no words. Alzheimer’s robs and leaves nothing in return except broken hearts, lifetimes and legacies interrupted, exhausted caregivers, lofty finances, and memory’s last breath. Despite all of this, we knew who he was. We cherished the moments of clarity and cognition where he shined through. The love and the family remains. I walk for the life he built and the love he created.  I walk for the many pieces of life stolen. I walk for my family’s story. I walk for your stories. I walk for myself as I grieve forward. I walk in hopes of Alzheimer’s first survivor. I’ll walk until Alzheimer’s is no more.

Thank you. Till Alz is No More.