Make a general donation to the 2022 Walk to End Alzheimer's - Tulsa, OK 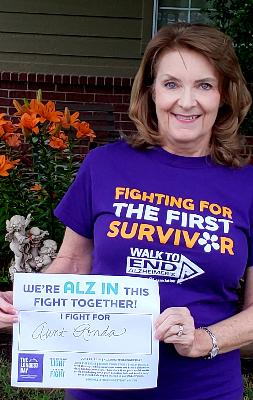 My Aunt Ronda has been my reason for participating in the Walk to End Alzheimer's these past few years. Aunt Ronda lost her fight with dementia on September 18, 2020, and will be missed, yet I am thankful that she is no longer confused. She had been living in a rehabilitation center since her fall in April. During her recovery, she began sitting near the nurses' station, and writing something in a steno pad as if she was back in her office. Every day at nearly 5 p.m., she would look at her watch-less wrist and announce, "It is time to go home". Now, she is home.

EVERY 65 SECONDS, someone develops the disease.  Alzheimer’s disease is relentless. So are we.