Gail is fundraising to honor 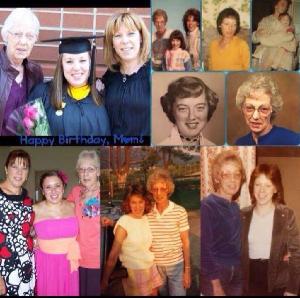 Mail-in donation
Hello! My mother was a vivacious, strong, independent woman. She was afflicted with Alzheimer's Disease and first started to manifest serious symptoms in 2013. My husband & I worked hard to keep her in her own home for about 18 months, but ultimately I needed to admit her to a Nursing Home. Caring for Mom, and watching her steady decline has been THE most difficult thing I have ever had to do. In some form, she still knew me, my brother, my husband and my daughter. But the better part of the last year and half, most everyone else she ever knew, were strangers to her, and she had no memories, whatsoever, of the life she had lived.

At 79 years young, 2 months shy of her 80th birthday, Mom passed away on June 5th, 2017, due to complications of a brief respiratory infection, with me by her side during her last days. Because of her chest x-rays, I had also learned she likely had lung cancer as well. She still knew me & my brother, and that we were with her. For that, I am thankful, that the Alzheimer's and/or the cancer did not reach its full circle and leave her an empty shell.

My worst fear is that my family will have to care for me and endure the pain I endured while, helplessly, watching my mother's brain slowly die. This is an insidious disease, currently with no cure or effective long-term treatment.

This is my 8th year participating in the Walk To End Alzheimer's. While I donate my time and money to other charities, this cause is MY passion!