Make a general donation to the 2022 Walk to End Alzheimer's - Mercer-Middlesex, NJ 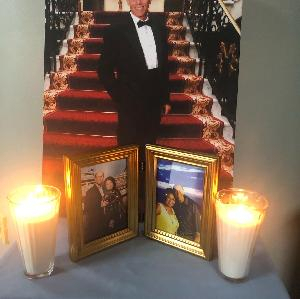 Support our team for the Alzheimer's Association Walk to End Alzheimer's®, the world’s largest event to raise awareness and funds for Alzheimer’s care, support and research..

We walk in memory of my Love of over 42 years, Alan Jacobs (gained his Angel's Wings February 2021), loving Dad & Grandpa.   Alan had such a strong zest for life, he taught our kids and grandkids to find that spark in all things.

From the beginning of our 42year marriage, we traveled the world. We journeyed to the Holy Land, walked the Great Wall of China, sailed through the Panama Canal, explored Australia, Spain, France, Italy, Switzerland, Costa Rica, China, Korea, Japan. Hawaii and Aruba were his favorites. Although Alan enjoyed casual walks and strolling on sandy beaches, he also shared his love of adventure, laughter, music, and life with his beloved children and grandchildren.  Alan went white-water rafting, zip-lining in Costa Rica and Mexico, climbed the Sydney Harbor Bridge in Australia, went sky diving with our daughter Arielle, and he drove on the Autobahn at 130mph with our son Adam. He also enjoyed golf, chess, ping pong, and billiards. Alan was incredibly proud and supportive of all his children Kevin, Stephanie, Adam and Arielle.  And Geoff.  Adam’s n Arielle's careers in the arts as Broadway actors kept us on the move.  We never missed a show and, no matter where it was in the world, Alan and I would fly or drive there to make sure they always knew that, on opening night, Dad was always there.

Whether he was playing with his grandchildren, helping out with homework or science projects, telling stories, making funny faces to make everyone laugh, or doing his favorite activity -- dancing with me every time there was music playing -- Alan was always full of joy.

While he could, and especially during the seclusion of the pandemic, we enjoyed walks along many county and state trails.  We reminisced about our hikes up along ridges of Lake Tahoe, springtime in the Alps, and other destinations over the years.  In March 2020, despite Alan’s continuing decline we were in Tulum, Mexico for our daughter's destination wedding. He ziplined, swam in cenotes with us, and most importantly, walked Arielle down the aisle and did the father-daughter dance with her.  And then things plummeted.

Alan required placement in an assisted living memory care facility; he developed what was called “terminal restlessness”, a precursor to requiring hospice. For a few months more, I would hum a tune and Alan would still take my hand for a slow dance.   We were at his bedside singing softly as Alan passed peacefully on February 17, 2021.  Alan was part of an Alzheimer's clinical trial at Columbia New York Presbyterian. In his honor and memory, we donated his brain to their ongoing research programs.  Alan, my Love, I love you to the moon, the stars and the heavens.  The photos I posted show Alan's essence and his love of life.

Thank you for joining the fight against Alzheimer's.