Make a general donation to the 2022 Walk to End Alzheimer's - Bergen-Passaic, NJ

Kelly is fundraising to honor 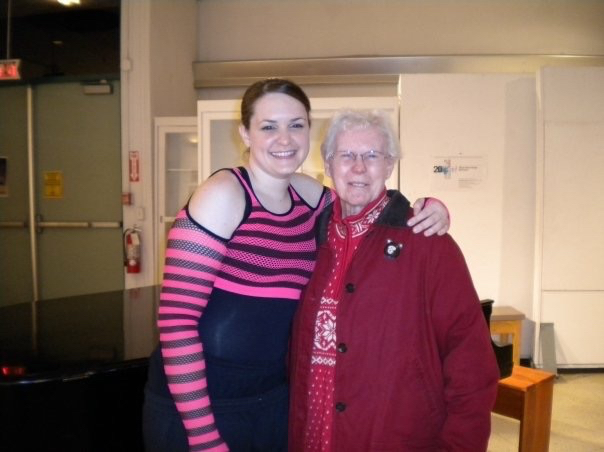 My Grandma and I after a college dance show

Mail-in donation
Every 66 seconds, someone is diagnosed with Alzheimer’s disease. Five million Americans are currently living with this awful disease; a number that is expected to increase to 16 million by the year 2050. 1 in 3 seniors die with Alzheimer’s or another form of dementia. Unfortunately one of my biggest role models, my grandmother, died because of this terrible disease.I am walking in the Walk to End Alzheimer’s in hopes of helping find a cure.

If you ever had the pleasure of meeting my grandmother, you have had the pleasure of meeting a real life angel. My grandmother could light up the darkest room with her smile, could chase away any fears with a few encouraging words, and could make anything better with a simple hug. She raised six wonderful children and helped raise even more amazing grandchildren, at least in my opinion.

Some of my favorite child hood memories are with my grandmother. She would take us to her work where we would pretend to be a trucking company, or an airport, or really anything that could come to our minds.She would always take to 7-11 or the bakery for some sort of treat, and you learned quickly that when grandma was coming to baby sit a good time was sure to be had. Between the sock fights, the pots and pans band, and hiding when mom and dad came home to check on us, Grandma always kept us smiling. My grandmother was always ready for a party, would be the first one to offer to have a drink with you, and loved a good Frank Sinatra song. She was your ray of sunshine on a gloomy day because she always had something up her sleeve for you, even if it was just a hug and an “it’ll be okay.” Just hearing her voice sometimes was enough to put you at ease.

One of my favorite things about my grandmother is that no matter where she went, someone always knew her from her job. The best part was that she remembered every person that came up to her, no matter how old they were or how long it was since they had been in the office. It is sort of a cruel irony that she would later develop a disease that caused her to forget those closest to her.

My grandmother has been gone for 8 years this year so we, as Grandma's People, are trying to raise as much money as possible. I miss my grandmother more than I could ever explain to anyone. I am walking in the Walk to End Alzheimer’s to honor her memory and raise awareness about this awful disease. Hopefully we can find a cure so that nobody else has to lose precious memories.