Make a general donation to the 2022 Walk to End Alzheimer's - St. Louis, MO

Jeanette is fundraising to honor 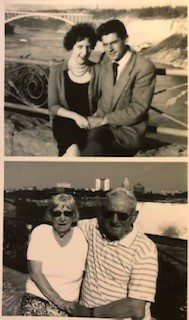 Spring 2011, my family moved into a new house, and my parents were visiting. My dad walkedoutside to get the mail, and then tried to walk into our neighbors’ house. I couldtell it really bothered him, but we didn’t make a big deal of it.

In Fall 2012, my father was officially diagnosed with dementia, specificallyAlzheimer’s Disease. By this time, he was suffering from middle-stage (moderateor stage 5) Alzheimer’s Disease. Because my parents live in Canada, I would flyhome for most appointments with his geriatric doctor so I could also understandwhat was happening to him and help determine if medication should be an option.During this time, I leaned on the Alzheimer’s Association website to learnabout this horrible disease. I wanted to understand what was happening to mydad.

Dad becamecompletely dependent on my mother. Eventually things became concerning, and wefeared he might hurt himself or others.  He had flooded their kitchenmultiple times, was not sleeping during the night, and was starting to wanderoutside.  He also showed signs of anger toward people, mainly men. Early in 2017, for my fathers safety, he was admitted into a memory carefacility.

In early 2018, I made it a personal goal to help educate others and raise money forAlzheimer’s Disease; and with this, I reached out to volunteer. Through my timeas an Alzheimer’s Association volunteer, I have been able to raise over $15,000. I have also connected a Monsanto family network group (SandwichGeneration) to help provide many learning sessions on Alzheimer’s Disease.

In the fallof 2018, we were finally able to convince my mother to move to a retirementhome. Throughout the years dealing with Dad, she had normal forgetfulness.After all, she was over 80.  Then in March 2020, as you know all too well, COVID-19 hit, and everything went intofull lockdown. My mother was restricted to her two-room apartment for aroundthree and a half months. While she was in this solitary state, my family and Italked to her multiple times a day through phone and FaceTime. However, she had no human-to-human contact or exercise.

In July2020, it was clear there was something wrong with her memory. My brother andhis wife started looking for an assisted living facility (up in Canada) for my mom to move to closer to him.

In October 2020, after one year without seeing my parents, I was able to travel across the border to Canada. I spent two weeks in self-isolation. I then brought Mum to stay with me before we moved her into her new apartment. We were able to gether on some medications to help stabilize her memory. But, with the pandemic, it would take months until we could get her into a neurologist and geriatricdoctor. We had peace of mind knowing that she was fully cared for and had someone administering her medicines.

In March 2021, my mother was officially diagnosed with Alzheimer’s Disease.

It does not seem fair that we must watch this horrible disease run its course, twice, through both of my parents, but I fear it is our fate.

Life is made up of memories, and that is what Alzheimer takes away... from my parents and from our family....

Please help and support my efforts by making a donation, no donation is too small, and every dollar helps!!!