Lori is fundraising to honor 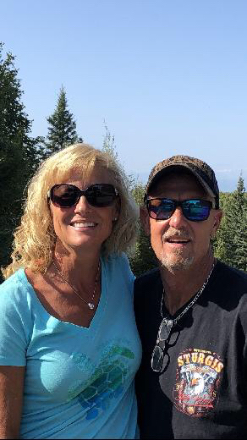 This is personal for me.  My husband, Cary Swanson, was diagnosed with early onset Alzheimer's Disease and Primary Progressive Aphasia.

It started in Feb of 2017 when Cary started to notice he was having trouble pronouncing certain words, or finding the right word. It was only every once in a while. In March we started noticing it more often, and by May we knew something was wrong when it became even more frequent and his speech slowed dramatically. His doctor diagnosed him with Primary Progressive Aphasia (PPA), but didn't know what was causing it.

In June 2017 we spent a week with the best neurologists in the country at the Mayo Clinic, and they confirmed PPA (logopenic sub-type), and suspected Alzheimer's Disease. On August 1 they confirmed that his spinal tap test results showed AD. He was only 58.

Within a year and a half, Cary had lost all ability to speak. Shortly after, he lost the ability to read and write/type. And eventually, had significant challenges understanding any language, as well as taking care of basic daily living needs.

On September 22, 2020, Cary lost his fight, passing away peacefully in our home. He was an amazing husband, father, grandfather, and friend.  He was loved by all and is missed terribly.

It's a horrible disease that affects more people all the time, and much YOUNGER people! We appreciate your support and prayers!