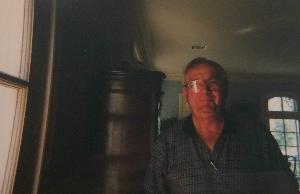 "Do your best, and that's the best you can do."

That's what a wise man once said. That man is Roger Wodarek.

Team Polski walks in memory of him for the second year. He was a father, brother-in-law, grandfather, great-grandfather, cousin, and friend. He has shown us what a great human being is. He has been a great amount, including his own experience with caregiving.

Now here is how we got here today.

Roger was diagnosed with Mild Cognitive Impairment (MCI) in 2012. He had been having some problems with his memory and activities of daily living (ADLs). This began a few years after the loss of his wife, Barbara, in 2006. He was suffering from depression afterwards.

Skip two years later. There had a great change since his first appointment with his neurologist. His memory was experiencing greater difficulty, as was his ADLs. His emotions were also greatly affected.

If you were around him as much as I was, you wouldn't see such a change compared to the people who rarely saw him. However, even though I did not see as large of a change in him as others, I still noticed the important things. As stated above, his memory, mood, and basic needs were being affected. He now needed more assistance with things you and I may take for granted. I, for example, used to take this for granted. I soon became one of those caregivers.

On Friday, September 26, 2014, Roger was diagnosed with Moderate Alzheimer's disease. A typical website will state that there are seven stages of Alzheimer's, but many neurologists - such as his - go by a three stage scale. Moderate Alzheimer's is an overall loss of short-term memory, compatibility of most basic tasks such as ADLs, and need of assistance.

I created this team two years in honor of him. I witnessed the gradual change in him over the years. I had been "in the loop" for over four years. I have walked seven times, and served two walk seasons on the Grand Rapids Walk Planning Committee. If you visit my personal page, you can read all about my inspiration.

I hope you join Team Polski on October 3. We lost him to this terrible disease on January 20, 2016. Roger was able to join us in 2014, making the day even more special. Please help remember my best friend by becoming a part of this team this year.