Make a general donation to the 2022 Walk to End Alzheimer's - Detroit, MI 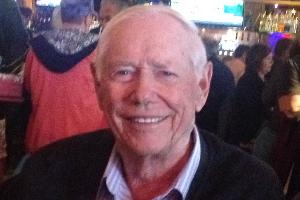 Gerald "Jerry" Gerber was an amazing husband, father, grandfather, and as much as his Alzheimer's let him remember - a great grandfather. Gerald was an amazing and happy human being who loved to keep laughter in the air and music flowing, especially on birthdays. The name of our team derives from his favorite drink The Manhattan. A drink supported by many and a drink that has the ability to bring great fun into any environment which is exactly who Gerald was. We honored Gerald and laid him to rest in October 2021 followed by a military solute as he is an Army Veteran. Even until his last days, Gerald was a sweet man who loved his music and his midday drink with whomever he could convice. Join Jerry's Manhattans while we raise money for a great cause and join us on walk day on October 29th as we walk through the Detroit Zoo in honor of those who are living with Alzheimer's, who have passed on, and the caregivers who love and support the ones dealing with it.