Rebecca is fundraising to honor 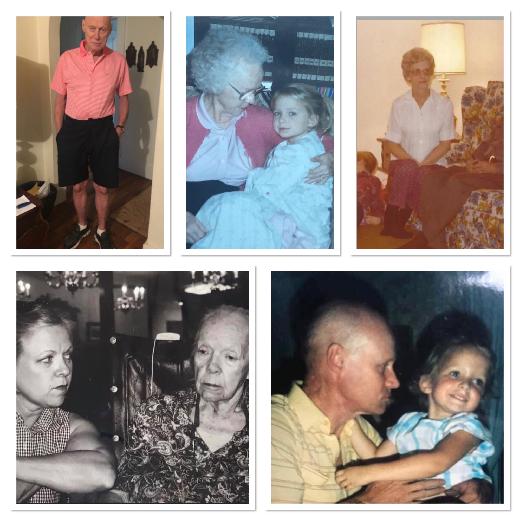 Dementia has broken my heart several times over. I have loved so many people who would eventually suffer from dementia. My first encounter with the devastating effects of dementia came in middle school. My paternal Grandmother left a message on our home answering machine looking for my Grandfather, who passed away when I was four years old. She experienced what is referred to as “sundowning,” which means her dementia worsens as the day goes on. If I caught her early enough in the day, I would see my Grandmother. She became more confused and agitated as the night came. Eventually, she was confused much more than not, and the chance to catch a glimpse of the Grandmother I once knew was soon gone

My heart was broken second time when I started to notice  changes in my maternal Grandma.

From the time I was born my Grandma, Agnes “Gertrude” Loyd, was a huge influence in my life.  She I adored her and always knew I was loved by her. My Grandma supported my brothers and me in everything we did. There was no milestone we reached that she was not by our sides.  She attended every important church activity, every school program, every dance recital and every graduation. The first time noticed something was off was at one of those milestones, my high school graduation.  Instead of signing my card, she signed my envelope.   When she realized what she did she became very frustrated. We had her sign it after I had opened it and not much more thought was given  However, within the next year more changes were noticed.   She was struggling daily to keep it all together.  Then she got sick, like many dementia patients the stress of the hospital increased her confusion.  She had Alzheimer’s Disease.  Soon she too,  was confused more than she was not.  I was fortunate and most of the time she recognized me, although she would sometimes think I was my mother instead. Through my college years I would visit my Grandma as much as possible but on the drive to Paducah, I had to brace myself as I never knew what to expect on my visits.  My last visit with her, she was in the hospital.  As I was leaving she began to cry, not something I witnessed very often, she reached out for my hand. I tried to comfort her but the more I talked to her the more upset she became. That would be the last time I saw my Grandma alive.

My most recent heartbreak was with my uncle, Kicky. Never married and never having kids, he spoiled me rotten. For some reason, Kicky thought I could walk on water. He called me his "sweet girl" and never failed to boost my confidence, no matter what was going on. Kicky was a fighter. He had a pacemaker and diabetes, which did not slow him down. He then was diagnosed with Parkinson's, a devastating disease in itself. However, with Parkinson's, he was also diagnosed with Parkinson's dementia. Just like with's physical effects of Parkinson's, the mental impact of Parkinson's comes and goes. One day everything would be fine; he would walk miles and know everything. The next day he could barely stand up and was super confused. He knew me most of the time, but he would get confused. He knew he was confused and usually took it in stride, getting frustrated with himself and sometimes laughing.   We tried an assisted living home, but he was always independent; he would run when he had a good day because he didn't think he needed the help. Through all his confusion, there was only one time when he didn't recognize me. However, he politely introduced himself to me. For the last few weeks of his life, I was lucky enough to stay with him. He fell in the middle of the night, and I am thankful that he was cognitively aware enough to remember I was there and call out for me.   I stayed with him as long as they would let me, and I was the last hand he held and the last voice he knew.

Dementia runs in my family. There is a misconception that Alzheimer's and other dementias are just symptoms of normal aging. Some have paranoia; some get violent, and if you are lucky, some are just heartbroken because they know they are losing their mind.   Having to mourn your loved one twice is cruel. Seeing them frustrated and scared because they do not know where they and they know it is devastating.