Alan Toliver is fundraising to honor 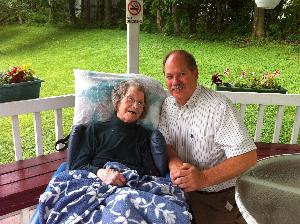 My goal is set at $3000. Can I count on you again to help me reach it? Together, we can end Alzheimer's.

My Mother passed away at 97, but had Alzheimer's for over 10 years. It started as slight forgetfulness. Then it progressed to hoarding of groceries and then lost the ability to pay her bills. Once we took over the payment of her bills, she thought we were stealing her money.

It continued to get worse when she went to the mailbox with 20+ inches of snow and fell. Mother could not get up and back to her house. Luckily, her neighbors saw her and helped get her in. She was admitted to the hospital and then to a nursing home for 8 more years.

Mother lost the ability to walk, could not feed herself, and had no short term memory. One thing she never lost was her devout belief in God. She went to be with the Lord on December 29, 2013. Even though she has left this world, her memory lives on.