Make a general donation to the 2022 Walk to End Alzheimer's - KS City, KS/MO 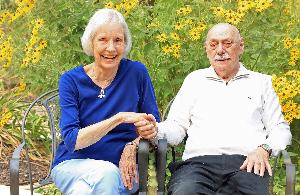 My dad, Chuck, is turning 93 in June. Trust me – I know what a blessing it is to have not just one, but both parents still with us. Chuck  has had an extremely full life – he was a Depression baby, born to immigrant parents in South Milwaukee, Wisconsin. Although his career moved him to Washington, Dallas and ultimately, Kansas City, he still refers to Wisconsin as “God’s Country.” Maybe because he met Darla, his wife of 63 years while tending bar in Madison, Wisconsin. Chuck served in the U.S. Army, translating(from Armenian and Turkish languages) for officers in the Pentagon. He went onto have a long career with the U.S. Government, but his happiest times were always those spent with Darla, his daughters and grandchildren, and a wide circle of friends. He is selfless and generous -- everything he has done in his life has been for everyone else.

Chuck’s signature line has always been, “so, where are you from?” He loves meeting people and has always been the life of every party. You can imagine the feeling in our guts when he started asking long-time friends his go-to line. Even his family members started hearing, “so, where are you from?” At first, we would jump in and protect him. “Dad, you know where Evan is from!” He could recover beautifully – “yes, of course I do. I’m just kidding!”

My sister and I started digging into everything we could find around dementia and Alzheimer’s. How do we deal with this? What if he hurts himself? When do we take the keys away? And how do we support Mom? I thought back to so many loved ones who had been impacted by this horrible disease and realized how uneducated my questions to them had been.

My friends at the Alzheimer’s Association stepped in at the perfect time, offering resources, education and support. The more I learned, the more I wanted to know. And I wanted to be a resource for others going through this – “I know what you’re thinking, I know what you’re feeling. I don’t have all the answers, but I am here.”

On February 24 of this year, we moved Chuck into a memory care facility. The first night was rough; every day since has gotten better. He is safe, he is happy and he is loved. It is because of my dad, Chuck, that I am inspired to do something meaningful. I am asking you to support me in this year’s Walk to End Alzheimer’s – Kansas City. I know we all have a Chuck in our lives –let’s do this for them. With a passionate team at my side, I know we will make a difference.