Make a general donation to the 2022 Walk to End Alzheimer's - Indianapolis, IN

Wanda is fundraising to honor 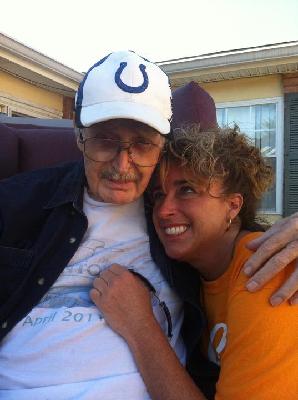 Oh how I long for one more hug!

Mail-in donation
Ten years ago we lost a very special man!  A decade!  Sometimes it feels more like a life time, when I try to recall his voice, hearing him call me his 'honey bunny', seeing his sweet smile, having him lecture me by pointing to a spot on his face saying, "You see this right here?  That's skin cancer!  You better wear your sunscreen!", hearing him laugh, and trying to remember how good it felt just to get a hug from him.  It never gets easier, but as they say, you learn to live with the loss.

This picture! It shows how much I absolutely adore(d) my sweet daddy!! However, his ever present smile wasn't on his face in this picture, because this was taken after Alzheimer's ripped my daddy from me, although I held on to this shell of a man as long as I could! There were times, fleeting that they were, that showed my daddy was still there. I realize I was lucky, as Alzheimer's can alter a person completely. We still got flashes of his smile occasionally and a good hearted 'jab' every once in a while to let us see his sense of humor wasn't completely gone.

Sadly, not everyone gets to hold on to a piece of their loved one once Alzheimer's takes over.  Which brings me to my ask......as most of you know, we lost my dad in March of 2012 to Alzheimer’s. I know that there is NO disease out there that is an easy one, but I think what makes this one so difficult is the fact that even though the person is still there physically, you have really ‘lost’ them months before they die, so when the time comes, you actually mourn a second time for the loss.  It was absolutely heart wrenching to look into my dad’s kind, blue eyes and know that he really didn’t know WHO I was. Granted, I believe that he did know that I was someone special to him, but the fact that he would have to ask me at times if I was his daughter or his granddaughter, well, it just broke my heart. And it was more of a sadness for him than for myself. My dad was one of the kindest, most loving men you could ever meet, and to see him embarrassed because he couldn’t recognize his own grandchildren and great grandchildren, well, that is something that really hurt. Because he was such a loving man, these kids where his WORLD before the Alzheimer’s got so bad. The little ones who all adored their “Pa Pa Boo” couldn’t understand what was ‘wrong’ with him and acted a little timid around him even somewhat 'scared' of him, which again, was heartbreaking to see.

For the past 10 years, our team "Barney Graham" has had many friends and family walking in my dad’s memory at the National Alzheimer’s Association “Walk to End Alzheimer's.“ We would like for this milestone 'anniversary' year to be our best yet!  We would like to ask for your help this year in the fight against this demoralizing disease, either by pledging an amount or joining the team and getting donations from friends and family members. I want to do whatever I can to ensure that no one else that I love will have to suffer from Alzheimer's by becoming a victim of the disease or having to watch a loved one go through it. Again this year, we are walking to help reclaim the future for millions.

By participating in the 2022 Alzheimer's Association Walk to End Alzheimer's, I'm committed to raising awareness and funds for Alzheimer's research, care and support. Currently, more than 5 million Americans have Alzheimer's and that number is expected to grow to as many as 16 million by 2050. Our future is at risk unless we can find a way to change the course of this disease.

I need your support to do my part! Please make a donation (no donation is too small, even $1 helps!!) to help the Alzheimer's Association advance research into prevention, treatments and a cure for Alzheimer's. For the millions already affected by the disease, the Association offers care, education, support and resources in communities nationwide.

We would love to honor my dad by being one of the top fundraising teams this year!  Again, no amount is too small!

no
Eli Lilly and Company