Make a general donation to the 2022 Walk to End Alzheimer's - Will County, IL

Karen is fundraising to honor 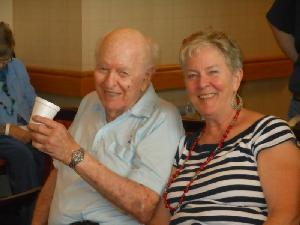 Dad and I during an afternoon visit at Senior Star 2013

Thank you for taking the time to visit my page. I am asking for your support of my effort to raise money for the Alzheimer's Association, which works hard, not only to seek a cure for Alzheimer's, but to provide support to those living with the disease and those who care for them.

This will be my 10th year participating in The Walk to End Alzheimer's.  I do it to honor the memory of my Dad, Bob Howard, who passed away in 2013. He struggled with the disease for roughly five years and it broke my heart to watch a once vital man decline to the point that he was unable to care for himself. I also walk in honor of my sister-in-law, Fanny, who has developed the disease.and in support of the 6 million Americans currently afflicted with the disease and their caregivers.

I have set myself the goal of raising $5,000 this year. I realize this is ambitious with so many worthy organizations asking for support, but I am asking you to contribute whatever you comfortably can in the hope that if I ask enough people I can attain the goal.

I would also love to have you join my team if you are local and wish to support the cause by doing your own fundraising.

The end of Alzheimer's begins with us.

A Brighter Day
Join My Team