Nicolette is fundraising to honor 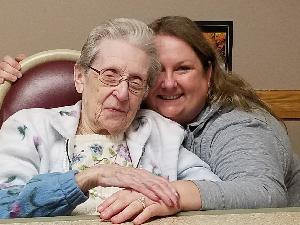 My story begins before I really knew what dementia was! I was 17 and we had a terrible ice storm. The town was without power for six days. I lived with my grandparents and we always made the best during any storm. Day 2 Grandma had fallen but never complained. Day 4 Grandpa decided we should get to the next town for a warm meal and heat that the County hospital was providing. Little did we know, Grandma's hip was broken and surgery was needed for repair. She never came back was what I always said. She wasn't the same. She swore, was aggressive and if anyone knew Maud Hoover, THAT was NEVER an option.  Thankfully she passed a few months later and we didn't have to watch her suffer. I say thankfully because dementia and all that comes with it can be so life altering.

My Grandma Teeters was the next family member to suffer from this disease. She was a very sweet and kind daughter of a preacher. Loved her family fiercely! Her dementia progressed slower and was more of a bittersweet type, if you will. She would forget little things and even certain people she should know, but always had a smile. Her laughter was contagious, yet you could see the worry when she was having a "day". Lil Marjie was probably one of the strongest women I've ever known. Lost a son who was 34 (my dad), then her second son just before her passing. This is where I used the term bittersweet. We told her the day my uncle passed and she was of course devastated for the rest of the day. The next day, however, she had put that somewhere else in her mind. I spent the entire day with her worried she would remember and fall apart, but she didn't. It was just like it never happened. While I never really grasped this, I did, on that very day learn how aggressive and life changing this disease is for EVERYONE involved.

Did I mention I worked in pharmacy? I thought I would be able to learn and cure and fix everything and everyone! LOL On that note, I had THEE absolute best Pharmacists to work with! Our most frequent relief Pharmacist became a very dear friend very soon after the first time we met. I was so consumed by her knowledge and learned her husband was also a Pharmacist, (AND owner of a Pharmacy, AND Vietnam Veteran AND on a School board AND a Drake Alum) and the list goes on!! My sons and I absolutely LOVED listening to him and his stories! He was 98% the inspiration for my son choosing the path he did! I could go on for days about how wonderful he was to me and his family for sure. Slowly things have a way of progressing... First he forgets the basics, then closes shop, then retires, then gets lost on the way to the VA, then becomes a scare to himself to be alone. The day my friend told me he was moving to a home was the most painful call we have ever had! My heart still aches for her, him, and the grown children he adores. He now thinks I am the family therapist and we can laugh but in our hearts we are broken.

As of very recent I learned that a man that I was proud to know and have a father/daughter like relationship with, died from complications due to Alzheimer's. He was FULL of life. Loved to travel, loved mountains, loved to live! He was suffering from beginning dementia and desperately wanted to have a back surgery so he could spend what time he had left traveling with the love of his life! He took a risk and the surgery progressed his dementia into living only sixty more days in misery. My heart again broke for all the people in his life! He was really a giant part of my childhood and I hate to think of how many times I should have called or wished I had done something more. Life has a way of making us see things whether we want to or not.

no
The New Homestead
yes