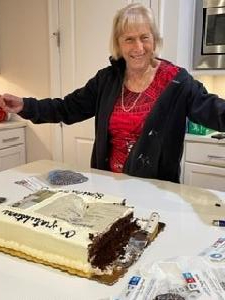 Survivor, shining light, fun, funny, forgiving and forever our loving mom. Born in Luxembourg moments before the escalation of WWII, Paulette, with her big sister Rose were forced into unimaginable circumstances. For the sole crime of being a Jew they were driven out of there homes and fled to France where they were ultimately imprisoned in a concentration camp. With the help of the allied forces and a strong belief in G-d, they were the lucky ones.....survivors! Paulette, Rose with parents Charles and Blanca eventually were able to immigrate to the US and made fantastic and fulfilling lives. Unfortunately, Blanca became a young victim of Alzheimer's in the 1970's. Little was known of the disease at that time and it quickly stole her from us. In 2021, it reared its ugly head again with Paulette receiving the dreaded diagnosis. Like everything in life, Paulette and Paul (Dad) took it head on. Mom is on a drug trial and fighting the fight. Together, in Paulette's honor, we fight along side of her to ensure, one day, we can end this disease permanently. Join Paulette's Peeps in this fight.

Joyce and Michael Ettinger and Family
$250