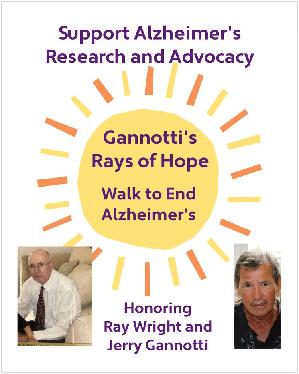 Gannotti's Rays of Hope was formed to honor Raymond A. Wright and Girard "Jerry" Gannotti.  MaryLou Gannotti, the daughter of Ray Wright and daughter-in-law of Jerry Gannotti formed the Rays of Hope to honor their memories as both men were living with dementia when they passed away.  Ray died in 2012 and Jerry died in 2021.  These men left behind their loving families and many grandchildren.  Both of them worked as high school teachers for over 30 years.  Ray taught Business and Accounting at Westerly High School in Westerly, RI and was a former baseball coach. Jerry taught art at Montville High School in Montville, Connecticut and ran a popular local restaurant in New London in the 70's and early 80's called "The Grinder King."  Both men were funny, smart, and afflicted with memory loss in their final years.  Gannotti's Rays of Hope encourages you to join or donate to our team as we do our very best to support research and advocacy so other families do not face a long goodbye with their loved ones.