Kristine is fundraising to honor 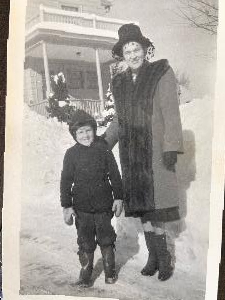 Isabel grew up one of five children during the Depression.  Life was not easy.  Her mother passed when she was young and she assumed a parental role for her siblings.  Consequently, she had drive, determination and laser focus.  These traits would serve her well later in life when she obtained her Realtors license and realized success beyond her wildest dreams. Her realty tagline reflected her no nonsense style: Buy and Sell with Isabel.  Aside from her passion for sales, she loved fashion, travel and dancing.   She dressed impeccably.  Her everyday attire typically included a designer, sheath dress, high heals and a matching hat.   With success, came an opportunity to travel with her husband, Al, both near and far.  Time and again they would return to their favorite spots: Falmouth Heights (Cape Cod), the Colony in Kennebunkport, Maine and the Princess hotels in Bermuda.  Isabel also loved to dance.  She and Al enjoyed ballroom dancing and would jump at the chance to Waltz to their favorite song: Hello Dolly!  Isabel enjoyed a full life with her husband, and her only child Brian, along with her daughter-in-law, Lee, and their 3 daughters: Kim, Karen and Kristine whom she lovingly referred to as "the 3 dolls!"

Her husband Al died in 1982 and Isabel tried to live on her own but her degenerative mind would begin to fail her and life became too difficult.  She moved from her apartment in Worcester to her son's home in Connecticut.  After a year of great challenges it became evident that Isabel was suffering from Alzheimer's Disease and would need to be placed in round -the -clock care.  Isabel lived for 16 years in the Pope John Paul II Nursing Home and passed away at the ripe, old age of 92. Just imagine all the shopping, traveling and dancing she could have done during those 16 years!

I am participating in the Alzheimer’s Association Walk to End Alzheimer’s® to raise funds and awareness to end this cruel and debilitating disease.  I hope you can join me!