Make a general donation to the 2022 Walk to End Alzheimer's - Vail Valley, CO

Melinda is fundraising to honor 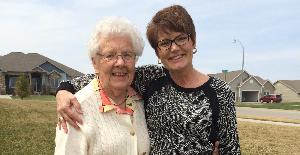 I'm leading the way to Alzheimer's first survivor by co-chairing the 2019 Vail Valley Walk to End Alzheimer's®. Currently, more than 5 million Americans have Alzheimer's and that number is expected to grow to as many as 16 million by 2050. Our future is at risk unless we can find a way to change the course of this disease.

I lost my mother, Twylla Sonquist, to this terrible disease in August of 2017. In fact, I lost her several years earlier because as the dementia advanced she was no longer herself. I am getting involved with the Alzheimer's Association in hopes of making a small contribution to the search for a cure. I would love to have friends and family join me in this effort by walking with me on September 28th in Eagle, CO and/or by donating to my team's fundraising efforts.Together, we can end Alzheimer's disease.