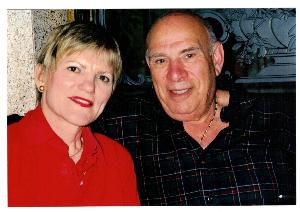 Syd Backman was my best friend, partner and constant companion for 38 years.

He was loving, joyful, and funny. After retirement he loved caring for me and the dogs - shopping, cooking, and taking the dogs for their daily outings.

Most of this was lost when he developed Alzheimer's. He lost his driver's license, became incontinent, forgot how to walk and his leg muscles atrophied. He kept falling and I did not have the strength to pick him up. He spent the last two and half years of his life in a wheelchair in care facilities. It would take two people to pick him up and take him to the bathroom or put him to bed.  At times he would act like a toddler, and at other times he would have flashes of total lucidity, when he would tell me he had nothing to live for. It was heart-breaking. We both suffered terribly in his last years.

It is so important that we find a cure for this disease, both for those afflicted, and for the greater number of people who care for them.

Please join me in raising the funds for the research.  Much is being done, but we have jet to find the cure.  The Alzheimer's Association gave me much guidance and support - social workers, classes on understanding and dealing with dementia; and other information and advice.

No donation is too small.  Every dollar helps.