Make a general donation to the 2022 Walk to End Alzheimer's - San Diego, CA

Heather is fundraising to honor 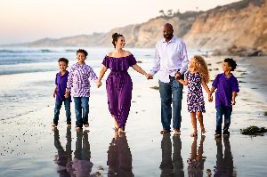 Kevin Morrison is 48 years old and has been diagnosed with Stage 5 Early Onset Alzheimer’s. He, his wife Heather, and their 4 children - 9 year old son Jayce and 7 year old triplets Jaylen, Myles, and Mya - reside in San Diego, CA.

In July 2020, their lives changed forever! After a PET scan, Kevin was given a terminal diagnosis and told he had significant impairment, also known as dementia. He was told that he would never work again (collegiate basketball coach), would never drive again, and that his wife would now have to be in charge of all family roles. In early May of 2021, a team of neurologists concluded that Kevin is more than likely suffering from Early Onset Alzheimer’s Disease.

The news has been completely overwhelming and devastating for the Morrison family emotionally, physically and financially. Kevin and Heather struggle with the prospect that Kevin will miss out on their children’s major life achievements, graduations and athletic accomplishments. Heather struggles with what the future holds and figuring out how to provide for and raise their 4 beautiful children without the role of their father.

Please walk with us as we honor Kevin and the Morrison family as they forge through this horrific disease.