Make a general donation to the 2022 Walk to End Alzheimer's - San Diego, CA

Angela is fundraising to honor

Jack & John Picou My grandpa and my dad. 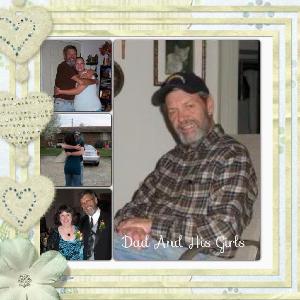 I am extremely passionate about finding a cure for Alzheimer's.  The impact of the disease on my family has been life altering.  When I was in high school my grandfather's wife could no longer physically care for my grandpa so he moved into our small already crowded house.  It was very different because he wasn't the same person he was when I was young.  My grandpa was the only person with the means to ever spoil me and the only family I ever knew outside of my immediate.  He became agitated, aggressive, and even picked on my younger siblings.  It came to a point where we couldn't give him the care he needed either.  He then moved into a facility closer to home where his wife Margo could spend more time with him.  It was really difficult to watch him lose everything that made him the amazing father, grandfather, and husband he was.  It was devastating when my parents told me the news that he had passed away of Pneumonia.  He was a gentle compassionate genius with endless courage.

When my dad was in his late 50's he began making some not so wise decisions.  Spending money he didn't remember and we didn't have.  He was put on leave at work for not completing paperwork correctly and confusion.  The medical leave lasted for about a year and he was going to the doctor for some sort of treatment.  He was released to go back to work.  Guess how well that went! When he started to get lost on his way home we finally determined what was happening based on experience.  Unfortunately, we were correct about the behavior and what it meant.  My parents sold the house and moved to Tennessee where it was cheaper to live and close to a VA Hospital.  My younger sister and 4 year old nephew went ahead of them and got settled so she would be there to help.  I was unable to pick up and leave at the time so I did what I could by being there every time they needed me. I don't know what was worse being my sister & mom who saw/experienced everything or me who only heard about ever detail and carried the guilt of not being able to take it all away from them.   My experiences were different with each visit.  I would take videos so I could watch how he changed.  I wanted to remember how to describe his behavior to people because his was very different from my grandpa.  My dad had Frontal lobe dementia (FTD) he lost his ability to put words together for sentences.  He would go up and try to talk to people and would scare them because they had no idea what was wrong with him.  There were many stories we laughed and cried at.  Eventually he was so far gone it was no longer if he hurt my mom or nephews but when so we had to make a change and put him into a facility for consistent care.

If only we were aware of the 24/7 support that is available now because of the Alzheimer's Association.  Locating a care facility was an entirely new battle when you are dealing with a younger active person.  He needed someplace that could tolerate him and yet he could also be active to get out energy.  We ended up finding a place that took really great care of our dad.  He would do laps around the halls with other patients that could barely move, eat, or even lift there heads.  The nurses loved him and treated him very good.  He was only there for about 6 months before it was time to say goodbye.  He left a void in that care facility where there was nobody else quite like him.  He was a very special soul who showed love to everyone he met.  My dad passed after a 10 year battle at age 66 in 2013.  He was a vegetable by the time he passed away and once again it was pneumonia that eventually took his life.  He was surrounded by his family as he passed and the song "Praise You In This Storm" was playing as the pastor from the local church walked in.  By the Grace of God he left with his children and wife present in the comfort of his own home. I knew he was at peace and that's what I wanted for him most.

We have come so far and know so much more than we once did.

Illumina Warriors for A Cure
Join My Team

View: Illumina Warriors for A Cure
Join My Team