Make a general donation to the 2022 Walk to End Alzheimer's - Huntington Beach, CA 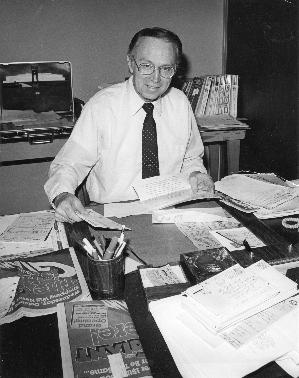 I’m sure you all know that our father could talk for hours about his views on politics and social issues. But when I think back, I realize that my sister and I know very little of his personal life experiences. My father would often remind us of that he started working as a boy, that in high school, he was able to buy a car with the money he saved, that he worked his way through college. But if asked him to share an interesting story from his life, he’d just say “I just did what anyone would do” or “I was doing what needed to be done.”

Old high school and college friends of his have some other tales to tell… how he played a key role in Russ Barnsdale meeting his wife Arlene and an evening driving around the cemetery with friends during my dad’s night shift there.

I don’t recall our father having a “how I met your mother” tale but it was probably along the lines of “we met at the beach and I brought her back to Glendale.” Our mother, on the other hand, shared memories of meeting my father when he moved into her apartment complex in Redondo Beach and how special she felt when he’d open her garage door for her as she got home from work. She talked about how they would regularly go out dancing together.

Our mother kept an album of newspaper articles and pictures of my father as a young, handsome, stylish up-and-comer in the newspaper advertising business. What a treasure that album has been for my sister and I, getting a small peak into this part of my father’s life that he would otherwise brush off with a dismissive “I did what you do at that time of life.”

Of course, one thing our father never hesitated to talk about was politics. There was no question where he stood on certain issues and if questioned he would simply share his views more loudly. It often felt like the choice was to either get in an argument with him or avoid certain topics altogether. I can’t deny it - my father was not always an easy person to get along with.

And having acknowledged that, I also have to say that I have come to appreciate what a hard-working, loyal and principled man my father was. His bull-dog persistence served not only him but the people and causes he supported. He would not hesitate to get involved with the local community, whether through the Lions Club, the church, or a block petition to protect parking privileges. He supported small businesses and attended city meetings. It was clearly very hard on him when his mind and body more and more encroached on his ability to do work that he found meaningful and important.

For all the small life details we may never know about our father, we *do* know that he held himself to his own high standards and work ethics. He didn’t shirk his responsibilities. He got up and brushed himself off through the inevitable knock-downs that life throws at us all. He kept doing the work that needed to be done.

In the last several years, I told my father many times how much I appreciate that he provided us with a safe, stable, enriched environment to grow up in. How much I admire his motivation and persistence and flat out guts in growing and managing his real estate business over the years. How much he should proud of himself for rising to the challenges in his life, for always supporting his family and his community.

Jack George King, 85, passed away Monday, August 24 in hospice in Long Beach, California. He was married to Judith Oliver King from 1966 until her passing in 2010. Jack is survived by his daughters, Cynthia King and Christine King, granddaughter, Dominique Barth and grandsons, Cole and Elias Barth.